We often get the question, “When is the best time to go sailing in Croatia?” Even though our busiest period is during the summer, we find that sailing in the Mediterranean in late September and October has many benefits! This is an opinion that is also reinforced by our repeat charter guests and our boat owners, who have discovered the perks of sailing later in the season. 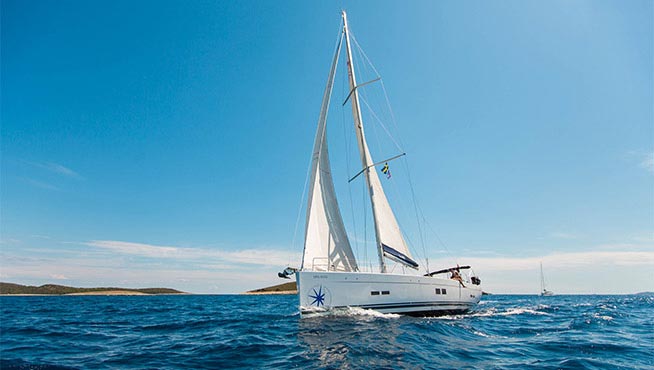 Here are the top four reasons why you should sail in Croatia in September and October:

One of the main reasons that it’s so wonderful to sail during this time of the year, is the change in winds, which start to pick up in the late summer and autumn! It’s windy almost all year along the coast of Croatia, which makes it a paradise for sailors! However, in July and August, these winds can be very light, so if you are hoping to really get the most out of your sails, you should definitely plan to go sailing later in the season. From September to May, the Mistral (NW) and Jugo (SE) winds are the most common, and also the famous Bura (NE) wind!

The Mistral wind is a cool wind that builds up on the sea and blows over the land, which means that it will blow from the northwest in most parts of Croatia. Since it’s an inland wind, it will mainly pick up in the afternoon, as the land will warm up faster than the sea, creating a difference in pressure and temperature. This is a very welcomed friend that will cool down a hot crew onboard, blowing in a nice breezy temperature.

When sailing in the summer period in Croatia, Jugo is a rare wind and would mostly blow at low speeds. But it’s a frequent wind in autumn and can get up to 50 knots (25m/s). In September and October, the Jugo starts to pick up a little from its summer slumber, allowing sailors to take advantage of it. Closer to winter, when the harbors are closed, this wind can be dangerous for sailors as it can create waves that reach 5 meters in the open sea and can really pick up.

The Bura wind blows in gusts and brings fine and sunny weather. It’s a “falling wind”, meaning winds are formed in the mountains and then get pulled down the slopes. The coastline in Croatia is lined by mountains, creating the perfect conditions for the Bura winds to build up. The Bura wind blows mainly during the winter in Croatia, and the summer is almost Bura-free. The sweet spot to sail the Bura winds is the short window in September and October before the wind gets too strong and powerful. Gusts of over 200 km/h have been recorded during the winter, but in September and October, the winds are still friendly.

Since most tourists visit Croatia during the summer months, the crowds tend to thin out in September and October. Take advantage of what is called the "shoulder season"! The restaurants are still open and your chances of getting the best table increase. You can be more spontaneous during your Croatia sailing vacation because you do not have to book a table in advance. It’s also easier to get a spot in the marinas so you can be out at sea sailing all day, without having to hurry to the nicest anchorages to secure a spot. This allows you to be more flexible and even pick and choose between secluded bays, marinas, and restaurants. Very luxurious!

Last but not least, the prices of booking both flights and a sailing yacht will be less than the prices during the high season! You could treat yourself to a bigger boat, or a longer stay, or you could spend a little more at a gourmet restaurant! So, our little tip to you, take advantage of the opportunity to sail in Croatia during the “golden hour” in the late season. The water is still warm, the winds are with you, the crowds are less, and the prices are the most attractive!

Book your sailing yacht in Croatia with Navigare Yachting now!