Lagoon 42 vs Bali 4.2:  A model comparison for both charter and purchase

Catamarans are a fast-growing segment of boating because they make great platforms for chartering, weekending, and bluewater cruising. For couples as well as families, cats in the 40-48-foot range are considered the ideal size and there are many to choose from. Two that pop up often are the Lagoon 42 and the Bali 4.2, both of which are available through Navigare Yachting for charter as well as for purchase and then placement into the charter. Let’s look at the benefits of each. 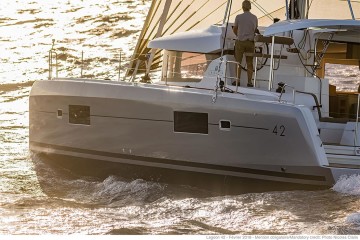 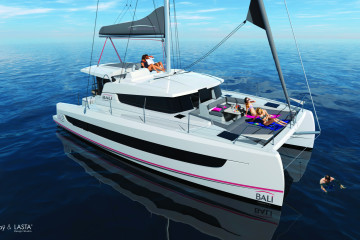 A quick examination of the basics shows very comparable models. The Lagoon 42 was designed by VPLP and built in France. It was named European Yacht of the Year in 2017 with subsequent US awards granted later. It has an LOA of 42’, a beam of 25’ 3”, and a draft of 4’ 1”.

The Bali 4.2 was designed by Olivier Poncin and Xavier Fay and is built in Tunisia by the French CATANA shipyard. The LOA is 42’ 2” with a beam of 23’ 3” and a draft of 4’ 1”. Lagoon’s extra beam may indicate slightly more room on deck and below but it’s how the space is used that will be noticed. For example, the Bali offers 852 square feet of deck space, which is about 10% more than its competitors and that’s because the brand forgoes the trampoline and instead, features a lounge and sunbeds on a hard foredeck that extends the usable outdoor space. Of course, catamarans have trampolines for a reason and that’s to keep them light in the fore sections for less pounding into head seas and therefore better sailing.

Light displacement numbers show the Lagoon is a little heavier at 12.1 tons vs Bali’s 11.4 and although 1,500 pounds makes a difference on weight-sensitive cats, it’s how you load a boat up with optional equipment, fuel, and water that will impact performance.

The sail area plays a big part in how well a boat will sail too. The Bali has 92 square meters of total upwind sail area while the Lagoon has 90. These numbers are based on standard full-batten mainsails and self-tacking jibs. Both models have options for a Code 0 for great downwind sailing. Will the 2 square meters of extra sail area on Bali make a difference? It can. But speed will also depend on the conditions, the loading of the boat, and the sailing skill of the sailors.

Both models offer standard and upgraded (more powerful) engine packages but they start from different places. Lagoon’s standard is 45-hp Yanmars which can be upgraded to 57 hp. Bali’s standard is twin 30-hp Yanmars upgradable to 45 hp. This will make a difference. Larger engines will push through head seas better and may generate enough speed to get out of the way of an oncoming storm. On the other hand, they also use more fuel both underway and when used to charge batteries.

Standard tankage differs significantly. The Bali offers 211 gallons of fresh water and 169 of diesel while Lagoon carries 79 gallons of fuel and 79 gallons of water. For charter and cruising, Lagoon owners will need to increase both to venture farther and live more comfortably aboard. It’s up to the buyer or charter to ask how the boat is equipped. Navigare offers an additional water tank on the Lagoon 42s we have in the charter.

There are significant differences on deck. As mentioned above, the foredeck layout in Bali is unique. There’s a solid foredeck topped with cushions that form a giant sunbed for four at the very least. The 4.2 also adds an extra twist-up here with an L-shaped dinette to port and a straight settee to starboard to accommodate a crowd.

On 4.2, there’s a door leading from the interior directly to the foredeck so you don’t need to walk aft and around on the side decks to reach the foredeck and the forward window also opens so food and beverages can be handed from the galley to the party upfront. Both the window and door bring in lots of fresh air when open so they cool down a hot boat quickly. Finally, catching a mooring and working with the windlass is easier on Bali because of the firm footing provided by the hard foredeck.

The forward social area takes the place of the outdoor cockpit found aft on the Lagoon. It’s just at the opposite end of the boat. That’s great when you want to escape the heat of the back part of the boat as you swing on anchor, facing the trade winds, but it’s not the best place to hang out underway on a boisterous sail.

The Lagoon offers two traditional net trampolines forward. This keeps the weight low(er) and makes a great place to lounge, watching the waves go by. The net on the Lagoon 42 allows excess water from waves to drain away easily from the foredeck. Cushions can be added to the small hard portion of the deck that is directly in front of the coachroof, but the main outdoor living area is the aft cockpit. There, you’ll find a dinette to starboard that seats eight, a single lounge to port, and a transom seat just ahead of the davits.

Both the Lagoon and the Bali offer a bulkhead-mounted steering station. Lagoon has it to port and Bali on starboard, but the differences don’t stop there. The Lagoon has stepped up to the wheel right from the cockpit and then just a step outboard to reach the side deck. On the Bali, you must go down three steps to reach the side decks and then three more to go aft and around to the main living area. When docking or anchoring, the driver can step away from the wheel to assist the crew more easily on the Lagoon because the helm station isn’t as high. Both helms offer about the same visibility forward but you’ll need to duck to see the transoms when backing on both models.

Although neither model is considered a flybridge version, both the Lagoon and the Bali have lounge spaces on the bimini. The Bali has a hybrid lounge/sun pad to port and a large sunbed aft as well as separate stairs on a port to reach these two areas. Guests will be able to relax up here and keep the driver company.

The Lagoon, on the other hand, has a double sun pad on the starboard with steps that lead up to it from the helm. Although fewer people can lounge up top, communication between the helmsman and those in the cockpit is easier and more directly on the Lagoon because the driver simply isn’t as far up.

We’ve discussed Bali’s forward cockpit in detail and one reason it’s so elaborate is that there’s no separate aft cockpit. Instead, Bali has a combination indoor/outdoor dinette because the entire aft bulkhead lifts electrically like a garage door, forming a combined saloon/cockpit area. The approach was developed to have only one space that serves double duty. It was a radical departure from traditional catamaran design, but it has been embraced by many.

Another stark difference can be found in the galleys. The Lagoon has refrigerator drawers in the cockpit with a front-loading fridge in the saloon. The modified U-shaped galley is to starboard. By comparison, the Bali uses a more familiar household-sized refrigerator and separate freezer below. Most people love the Bali fridge, but it will be less efficient than the drawers because it will lose its cool temperature faster each time the door’s opened and that means more draw on the batteries and more fuel used to keep them charged.

The galley on the Bali is split. The stove is forward and the sink is aft so more cooks can work side-by-side and simultaneously. The Lagoon offers a single sink while the Bali has twins and both have three-burner stoves. Both models also have a nav desk to starboard but the one on the Bali is a bit larger and may appeal to captains who like a dedicated space.

The accommodation layout varies too. You can opt for four cabins and four heads on both models. The Bali offers four wet heads of roughly the same size. None have a separate shower stall. The Lagoon offers wet heads for the forward cabins and separate shower stalls for the aft cabins. If the owner’s version is chosen on the Lagoon, the suite will occupy the entire starboard hull with a luxurious head in the bow. The Bali offers a five-cabin layout with a skipper cabin in the starboard bow and a separate head in the port bow and this feature comes in handy on a charter when hiring a professional captain.

The Bali brand was developed for comfortable cruising with house-style amenities and lots of living space. The 4.2, which has the expanded foredeck concept, delivers on all the brand’s promises. The Lagoon 42, which replaced the popular 420, changed to improve performance. The gullwing on the bridge deck was redesigned for less pounding upwind and the mast was moved aft to reduce pitching. The boom was shortened but the mast grew so there’s more sail area up high where it counts.

The boats are comparable but different. Some people may simply like the aesthetics of one model over the other. Ultimately, personal preferences will drive the decision but whichever you choose and however you use it (on charter or as a private vessel) you’re guaranteed extraordinary adventures for years to come.